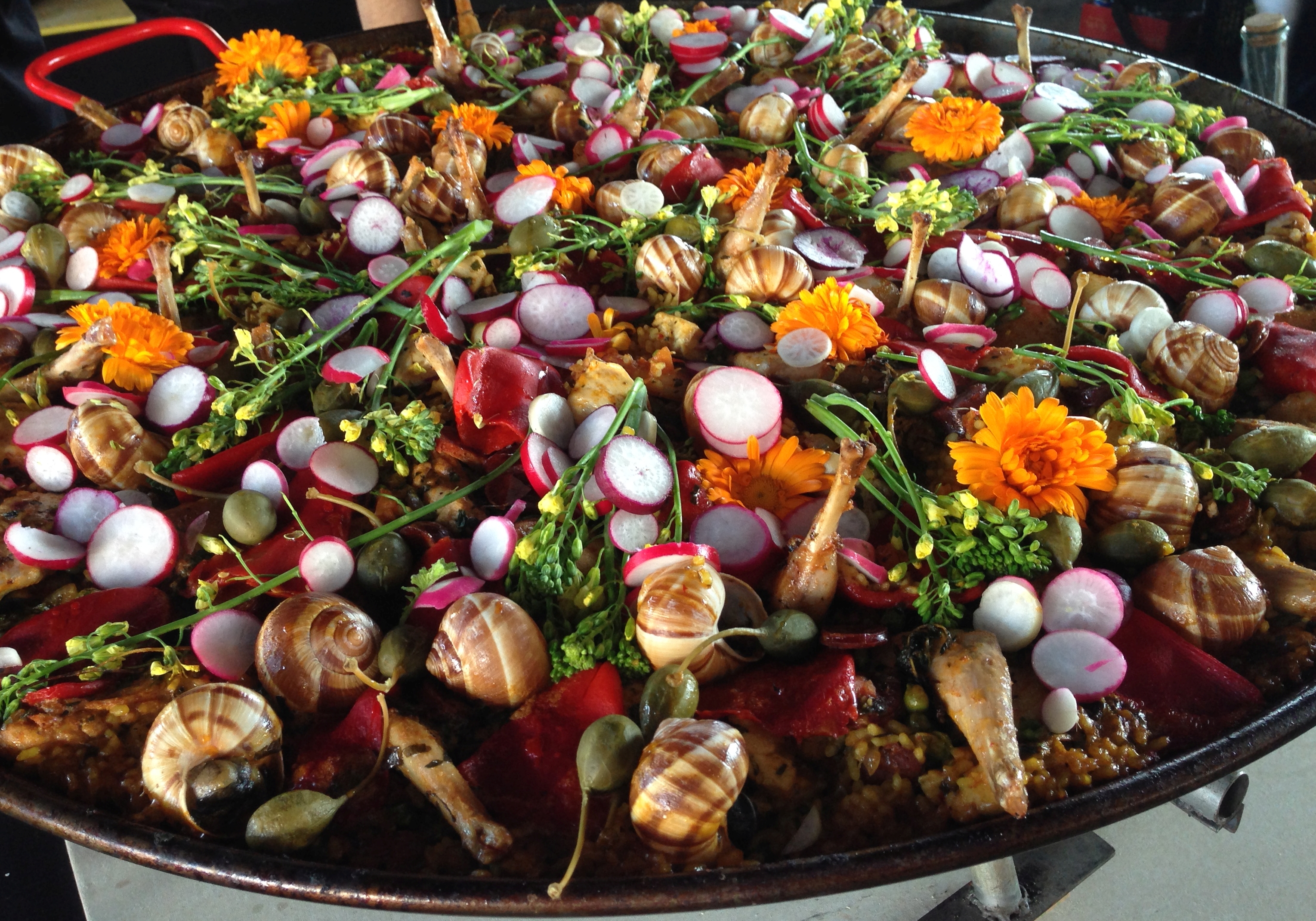 The paella that started it all, the traditional Spanish paella made for lunch over an open fire by field laborers in Valencia. All the ingredients were readily available and is quick to cook without the need of a kitchen. You can include the snails if they are available or substitute rosemary instead as they do in Valencia. The rosemary infuses with the rice, imparting an enticing aroma to the dish.

Cut the chicken wings in 2 parts, discarding the tips. Chop off the bony end of the leg. Divide the rest of the chicken into quarters, then cut into 2-inch pieces with kitchen shears. Do the same with the rabbit. Sprinkle with salt. Set aside a few snow peas for garnish.

Heat the olive oil in a 17-18 inch paella pan. Sauté the chicken, chorizo and rabbit over high heat until brown (it should not be fully cooked), about 5 minutes, turning once. Throw in the snails and cook for about 5 minutes. Add the green peppers, onion and garlic on high heat until slightly softened. Stir in the green beans, snow peas and artichokes, cooking on high heat for another 3 minutes. Add the tomatoes and parsley, cook another minute, then mix in the Spanish paprika.

Stir in the rice and coat well with the pan mixture. Pour in the hot broth and bring to a boil. Add salt to taste and continue to boil for another 5 minutes or so. Stir and rotate the pan occasionally until the rich is no longer soupy but enough liquid remains to continue cooking the rice, about 5 minutes.

Cook uncovered until the rice is almost al dente, about 10-12 more minutes. Arrange the reserved snow peas over the rice remove to a warm spot, cover with foil and let rest for 5-10 minutes. Return the paella over high heat and cook, without stirring until a crust of rice forms at the bottom of the pan, usually only 1-2 minutes. This will form the socarrat, the thin layer of rice on the bottom of the pan that becomes brown and crusty. It is considered the quintessence of the paella.

Note: Chorizo is not usually added to Paella Valenciana, but we at Aurelia's feel it adds a wonderful depth of flavor!